After talking with @CathyKeisha today, i decided i'd write about my hot tub adventures. For all of you with kinky thoughts, get your minds out of da gutter, it was really not as fun as it sounds. In fact, it wasn't fun AT ALL! First let me explain how our house is set up so you can better understand the whole scenario. Off the family room is a door leading out to our screen porch. There's a cat flap in the door so me and Zoe can come and go as we want, and since our litterbox is out there, it comes in quite handy. Well, last year my daddy got a hot tub and it's also in da screen porch. I like to jump on top of the cover as it gives me a much better perspective of all the sqwerls that like to torment me so muches! One day daddy was out piddling around doing something wif da hot tub and da cover was off. All of a suddens there's this humongous splash as i jumped right into the dang thing. I figured i'd jump up there like i always do, but this time kerSPLASH! I swam/crawled out so fast that daddy said i was out before i was all da way in! i ran in thru the door, which luckily for me was open, and ran thru da howse and hid under da bed. Of course my folks were laughing at me, but i thought it was not da least but funny! Mom followed the trail of water and eventually got me out from under da bed and held me close, wrapped up in a towel. I was SO SCARED! I had neber been swimming befores, and i think i don't much care for it! Mom got me dried off a bit with da towel, but i spent the rest of the night cleaning and cleaning and cleaning. In da morning mom said my fur was the cleanest and prettiest she had eber seen it.

Then, a few weeks after this horrendous affair, my daddy was getting out of da hot tub after his long day on da golf course. He needed to relax his muscles he says. Anyhoo, as he was getting out on one side, I JUMPED IN FROM DA OTHER SIDE! I know, can you believe it??? Daddy saw me swimming as fast as i possibly could and he scooped me up right out of da water. I ran in the house, this time the door was closed and i went thru da cat flap at at least one bazillion miles an hour. Mom was inside da howse and just saw a silver blur running thru da howse and under da bed. In case you haven't figured out by now, under da bed is my safe hidey spot. Again, mom coaxed me out, wrapped me up in a towel, and i had to clean myself for da rest of da night. She wasn't even mad about all da water i splashed thru da howse. She says at least if i'm gonna go swimming it's good to go in heated water so i don't fweeze to death.

Well, they sure had their laughs, and fortunately i haven't been in since. Two mistakes is more than enough. They used to fink i was a pretty smart cat, but after this they have their doubts. I neber been so scared in my entire short life! I still jump on top but only when da cover is on. Hopefully, i've learned my lesson.
Posted by CrazyFusa at 9:14 PM 6 comments:

Look what i just gots in the mail! I won it at #pawpawty last month. Our pal @frugaldougal was having a contest, and i had the correct answer, and ta-da! I won cat toys, donated by @emmythecat. I was so excited since this the first time i won anything! They are beautiful handmade toys all in bright colors. I love the one with the long piece of yarn hanging from it the bestest. Mommy teases me with that one a lot. 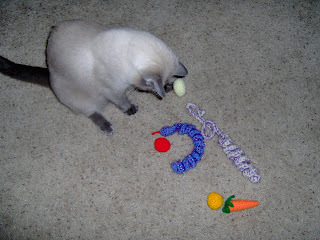 The round little "balls" i throw up in the air and try to catch. All in all, these will be hours of fun for me. Thanks so much to @frugaldougal and all the work he does for the #pawpawties, and to @emmythecat for donating the toys!
Posted by CrazyFusa at 7:18 PM 3 comments:

Well, most of you know, I've been pining away for my missing girlfriend @isagold. She's Back!!! I am so happy! We first met probably almost a year ago. I had been chatting with her via Twitter. I had a crush on @maddybasset but didn't know if the whole cat/dog thing could ever work out. As I was contemplating my dilemma, @isagold let her feelings known to me - she was in love with me, ME, can you believe that! I was getting all hung up on @maddybasset and my true love @isagold was right there in front of me! She's a few years older than me, so she calls herself a "cougar". Then at one of the #pawpawties, my (now) buddy @kingtuttifruiti starting hitting on @isagold. Well, I read thru the tweets afterwards, and thought I had lost her forever. But she explained to me that she had a little too much to drink and she was still in love with me. And, we all know, that @kingtuttifruiti can be a bad influence! Now, don't get wrong, Tutti's a great guy and is now my best pal, but he likes to create trouble sometimes, though it's all in fun. He even went to a lot of work to line me up with some other girls. Just trying to help me out, he said. I was about to the point where I thought I'd never hear from @isagold again. You see, last November, her family was moving to a new home, then came the holidays and I got a nice greeting from her. But then, nothing. I thought maybe she didn't like my any more, or worse, that something had happened to her or her family. Well, she just got back in touch! Seems there was a lot of things going on with the move and all, then her mama was sick. But, all is well in the Fusa World now. My love is back, gosh I missed her so much!

Now, my friend @kingtuttifruiti doesn't have to keep hearing all my complaining!

CrazyFusa
I'm a siamese cat from Humane Society. Got adopted into family with another cat, Zoe, a Tonkinese. I call her misshissygrowl, because that's what she does around me! I love my foodlady, daddy and missy.